Looking at the median ROE ratio of the major European banks it becomes evident that most of these banking institutions are like operating in “safe mode”. Meaning that they are not yet in a position to produce the profit they once did as percentage of their equities. If this is the case, then an important question should follow: How long will it take for European banks to recover their full “functionalities”? It’s been quite some time now which is counted in years that they haven’t done so at all. 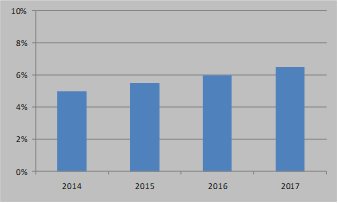 On the other hand, what were the ROE levels back in the good years, meaning pro last crisis, in the European banking sector? The ROE levels stood between 15% and 20% for the great majority of banks according to the EU Banking Stability Report (November 2007) of ECB. 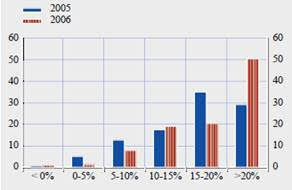 In this context, how should we interpret the above development? Well for sure it is not encouraging. After years of tackling their structural problems inherited from the last crisis and subsequent recession cycle, the majority of European banks are struggling to increase their return ratios which comprise the most important indicator they have to monitor if they wish to make their shareholders much happier.

Not only do the banks have to overcome adversities such as their non-performing assets and their bad loans in particular but they also have to take urgent decisions on their operating cost structures which seem not to be in line with the changing industry environment (less need for intermediation, trend of deleveraging, rise of the fintech sector and other factors could be mentioned here).

Another concern with the ROE objective for any given bank in this period of time is that both the nominator and denominator of this ratio encompass a great quantity of uncertainty. The nominator is the earnings which still appear weak, volatile and less predictable, whereas the denominator is the equity which is vulnerable and less transparent given the low quality of the assets depicted on the balance sheet.

So, what should anyone expect going forward: The struggle of the European banks to foster their return ratios is most likely to carry on given the sector’s fundamentals, the liquidity conditions and the fact that interest rates in Europe are not expected to significantly advance in the near future, a factor which in otherwise could help profitability to rise. Therefore the full “functionalities” of the European banks are not to be recovered yet and more time will be needed for these banks to match their past, pro crisis, performance.