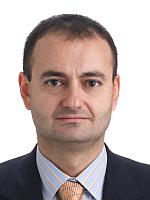 Dr. Vamvakidis Athanasios, is the Head of European G10 Foreign Exchange Strategy for Bank America Merrill Lynch (BAML) in London. He joined BAML in late 2010 from the IMF, where he worked for more than 13 years in various positions, more recently as a Deputy Division Chief in the Advanced Economies and Multilateral Issues Division of the Strategy, Policy and Review Department. During this position, he was one of architects of the IMF-FSB Early Warning Exercise. His IMF career also included assignments in the European, Asian and Pacific and Research departments. During 2004-2007, he was the IMF Resident Representative in Croatia. He holds a BA in Economics from the University of Macedonia in Thessaloniki, Greece and a Master and a Ph.D. in Economics from Harvard University. His research interests include a broad range of topics in international economics and macroeconomics and he has published extensively in all major academic journals in his field.

Below you will find his interview to the Derivatives.gr on 21st of December 2011 about his view on Euro.

Derivatives.gr-Question: Although the Euro has weakened recently, it remains strong compared to historical levels and certainly well above what would be expected from a region threatened by a spreading crisis. What is the reason?

Vamvakidis Athanasios: The FX market reaction to the Eurozone crisis has been a puzzle. Although the Euro has weakened substantially since last May, when it flirted with levels close to 1.5 to the US dollar, it is about to end the year only slightly below where it started. We believe that the EUR has been supported by market expectations that the European authorities would not allow tail risks scenarios to unfold and central banks will continue diversifying their fast rising reserves towards the EUR. However, both these assumptions could be about to change.

This puzzle can be solved, in our view, if the EUR is seen as a peg of a vulnerable economy with substantial central bank foreign reserves. The EUR support is not provided by the ECB, but by all central banks that continue diversifying their foreign reserves towards the EUR. As in past vulnerable peg cases, even though markets are increasingly concerned about the Eurozone crisis and the absence of an effective policy response, it may take a while before they decide to “attack” the currency.

However, if the EUR “peg” breaks, the currency could weaken substantially. Consistent with past currency attacks, a threshold could be reached in which markets move decisively against the EUR. Moreover, in contrast to past currency attacks, there would be no central bank to support the peg if reserve managers revise their diversification strategies in response to a systemic shock from the Eurozone. The trigger could be one of the obvious risks, or a random event, but its timing is hard to predict.

Vamvakidis Athanasios: Indeed, it is not only the Euro strong, but the US dollar weak. The Fed has been much more dovish than the ECB. Even though the ECB is now cutting policy rates, its policies remain much tighter than that of the Fed, with higher rates and resistance to quantitative easing. One could actually argue that, to some extent, the Fed is intentionally keeping the US dollar weak to support the recovery.

In addition, high oil prices have been bad for the US dollar. This is explained by three main reasons: the US is one of the less energy efficient advanced economies; oil producing economies receive their revenues in US dollars, part of which they sell to diversify towards other currencies, and particularly the Euro; and Middle Eastern oil producing economies trade less with the US than with Europe. Despite the recent slowing of the world economy, oil prices have remained relatively high because of political instability and uncertainty in the Middle East, which in turn has been weighing on the US dollar.

Finally, the unsustainable long-term debt dynamics in the US have been bad for the US dollar. The inability of the two main US parties to reach an agreement on how to reduce the government’s debt-to-GDP ratio in the medium to long term, from levels that could become explosive, leads to market expectations that the US could try to inflate its way out of its debt, which then is bad for the US dollar.

Derivatives.gr-Question: A strong USD could increase the unemployment rate in the USA? What could be the consequences for Europe and Asia?

Vamvakidis Athanasios: Indeed, the weak US dollar has been helping the US recovery, with exports becoming on of its growth engines, although from a low base. We do not expect the USD to strengthen substantially, unless a full blown Eurozone crisis leads to the collapse of the Euro, or an unexpected shock leads to another global recession. However, in this case, the negative spillovers from the collapse of the Eurozone economy, particularly through financial sector channels, will be much more important than the loss of price competitiveness from the stronger US dollar.

Derivatives.gr-Question: What is the outlook for the euro in the next 2 quarters of 2012?

Vamvakidis Athanasios: We expect Euro to drop to 1.25 in early 2012, as the Eurozone crisis deteriorates, heavy maturities for both sovereigns and banks reinforce funding pressures, reform implementation in the periphery continues being challenging, the ECB cuts policy rates further, and the US starts tightening its fiscal policy. We also expect a recession in the Eurozone next year (-0.6 yoy real GDP growth), driven by a combination of the deterioration in confidence, the fiscal drag, the negative feedback loop between funding costs, bank deleveraging and growth, and a weakening external environment.

Steps to address the crisis could keep the EUR-USD in a range, although narrower than the one in 2011. Eventually a more effective crisis response will support the EUR, but we believe only a further escalation of the crisis will make such a response politically feasible. The recent announcement that Euro-Zone countries, including Germany and France, could face a ratings downgrade is symptomatic of the constant headline risk for the euro.

We believe that the risks to our projections are on the downside for the Euro. A detailed plan toward a fiscal union and a Eurobond, accompanied with a strong ECB commitment to support Italy and Spain would be EUR positive, but is unlikely unless the situation deteriorates further. On the other hand, the absence of a clear plan to address the crisis exposes the Eurozone to systemic shocks that could weaken the EUR sharply, particularly if central banks stop diversifying their reserves toward the EUR.

Derivatives.gr-Question: In terms of a currency, is there any safe haven an investor can convert to from another currency?

Vamvakidis Athanasios: This market lacks safe havens. During 2011, the Swiss Franc and the Japanese Yen played this role. However, the first is not pegged to the Euro, while the second is constraint by expectations for central bank intervention. Some emerging markets that did well in 2011 are now under pressure as the world economy is slowing and concerns for local bubbles come to the fore. Similarly, commodity currencies are subject to elevated global economy risks, particularly from slowing or even a hard landing in emerging markets.

Looking forward, and despite the risks to the US outlook, we believe that the US dollar remains a safe haven, particularly if a deterioration of the Eurozone crisis and fiscal tightening across the advanced world threatens a new global recession.

Derivatives.gr-Question: Which asset class do you consider as a safe haven for the next 2 quarters?

Vamvakidis Athanasios: Monetary easing in the face of elevated commodity prices should cause gold to outperform most currencies, despite the recent correction. With interest rates already very low, easing of monetary policy will have limited positive impact, especially as inflation is likely to prove to be sticky. Possible QE3 in the US, given that bond yields are already reaching their lower limits, will likely be both less positive for risky assets and less negative for the USD. We also see gold as the hedge against all risks, and there are many risks in the global economy today.